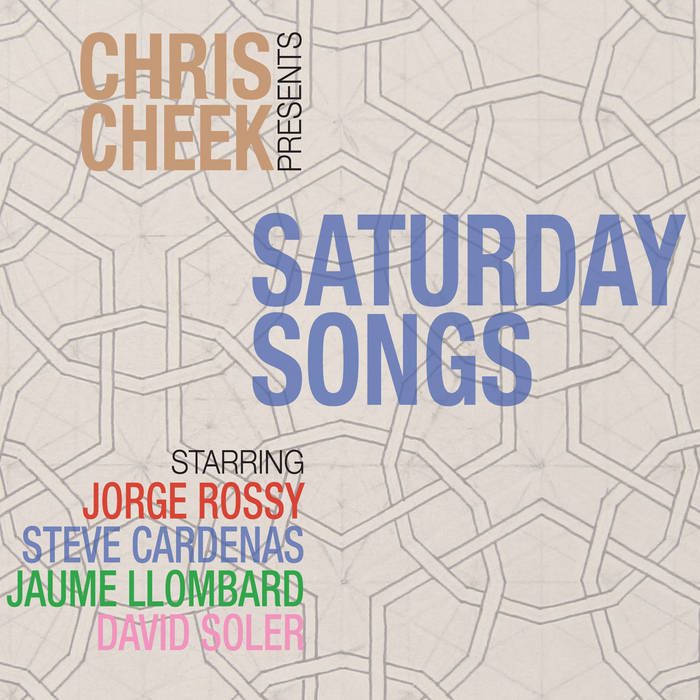 Miles Allen Chris Cheek and Jorge Rossy always sound so great together! Love the beautiful, simple writing on this album.

The tremendously talented saxophonist/composer Chris Cheek has come to feel at home in a variety of musical contexts, from the infectious grooves of Brooklyn Boogaloo Blowout to the challenging global music of Guillermo Klein. Weaned on rock and country while growing up in the 1970s St. Louis, Cheek’s initial musical forays playing Top 40, rock and funk tunes at weddings and private parties made him comfortable with blues based music and a fan of the guitar.

On his new recording, Saturday Songs, Cheek has utilized a multitude of techniques and influences to generate compositions that are stimulating to musical theorists and foot tappers alike. The effectiveness of his compositions lays in his ability to write good songs, regardless of the techniques used but often employing simple elements that make the music stick with the listener.

Much of his compositional style’s effectiveness stems from his love and use of the guitar. Cheek has always been drawn to the instrument and its openness of sound, the plugged-in aspects of the electric guitar and bass being literal driving elements of his ensemble’s sound. The fret masters that he enlists for the recording include guitarist Steve Cardenas, pedal steel expert David Soler and electric bassist Jaume Llombard. The musical polymath Jorge Rossy rounds out the ensemble on drums, vibes and marimba. The addition of the vibes and marimba added a certain flexibility that Cheek enjoyed, these fixed pitch instruments blended well with the non-fixed pitch of the pedal steel.

Cheek has maintained a long and fruitful collaboration with Cardenas over his years in New York. His relationship with the Barcelona based Rossy has been just as long and fruitful, as the drummer was once a New Yorker himself and an integral member of the 1990s and 2000s scene. It wasn’t until recently that Cheek met Spaniards Soler and Llombard, he played with the former as a member of the Bridge Trio and the latter as a multi-instrumentalist from Barcelona.

The quintet came together for a short tour of Spain, where they had a memorable visit to the Alhambra in Granada (the source of the group’s whimsical photo). Originally planning to record at Rossy’s home studio, the group moved the sessions to Supertone Studios in Estivella, Spain under Rossy’s recommendation.

The pieces that Cheek brought to record come from various inspirational sources. A handful of pieces utilize a method of symmetry in composing where Cheek takes changes and/or melody from well-known compositions and rearranges them to create all new pieces, mainly through mirroring. Other pieces come from other practices and inspirations, ranging from rock progenitors to ancient calculating methods.

The recording begins with the twang and broad beat of “String Finger,” one of the symmetry pieces that happens to be inspired by the pre-Incan Quipu system of counting knots. Written along to a car alarm while enjoying a ginger ale, “Ginger Something” is a bouncing, rhythmic rocker with a hat tip to Ginger Baker. The simplicity of “Eye Factory” makes it instantly catchy, while group synergy on the riff based, Buckminster Fuller tribute “Bucky’s Blues” is truly outstanding. Created by simplifying the harmony and applying a new melody to a jazz tune, “Either Way” is moving and beautiful. “Slow Ships” is a somber ballad written by taking a lyric and constructing it in a sort of plainchant, making a clear and cogent melody reminding Cheek of ships on the ocean.

The exotic melody of “Saturday Song” utilizes famed composer Olivier Messaien’s nine-note scale, Mode 3, which is then joined by two supportive lines all over a constant groove. Apropos to the group photo, the churning “Alhambros” is a reflection on the fascinating Islamic geometry used to create the Alhambra and also a dedication tribute to those who built it, not to mention the craftsmanship of the band. Tom Jobim’s wistful “Forever Green” was a song that Cheek loved instantly and wanted to record. Cheek’s “Strawberry Jam” was born for the band to jam along its ascending and descending lines. The lovely “While You Sleep” simply came out as a long seamless melody, while the optimistic “Windmill Hill” was written as an homage to the mysterious people who created the stone circles in England and whose “primitive” science was so incredibly advanced.

Whether from reworking other tunes or studies on ancient civilizations, Chris Cheek has found inspiration in the craftsmanship of generations of incredible artists and artisans. He has put his craftsmanship on full display on Saturday Songs, a heartfelt and, occasionally, raucous celebration of music that moves the listener.

Bandcamp Daily  your guide to the world of Bandcamp